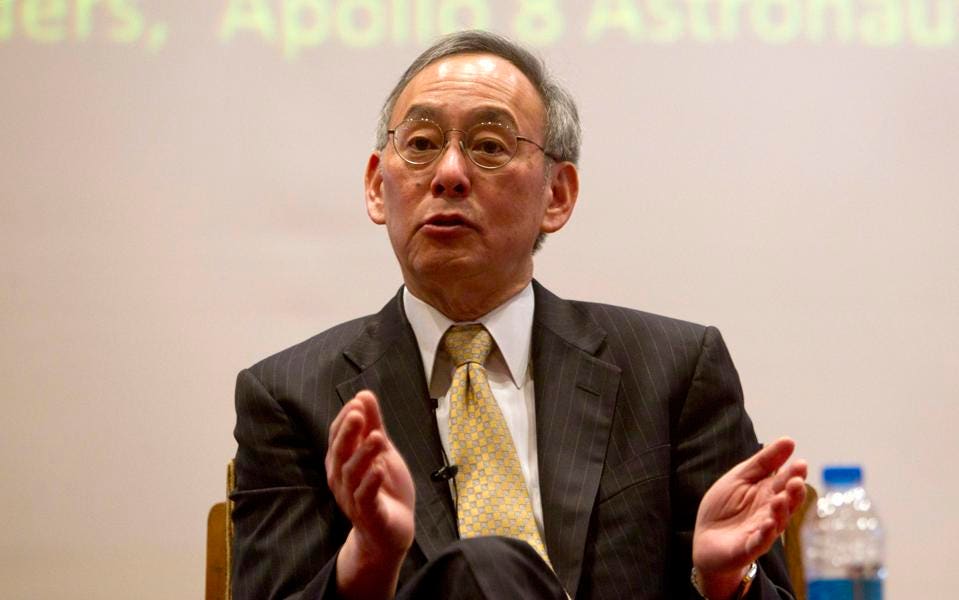 Steven Chu, former U.S. Secretary of Energy, 1997 Nobel Prize winner in physics, and the new president of the American Association for the Advancement of Science. (AP Photo/Tsering Topgyal)

The world economy is based on ever-increasing population, said Nobel laureate Steven Chu, a scheme that economists don’t talk about and that governments won’t face, a scheme that makes sustainability impossible and that is likely to eventually fail.

“The world needs a new model of how to generate a rising standard of living that’s not dependent on a pyramid scheme,” Chu said at the University of Chicago.

Chu didn’t specify what that new model would look like, but he offered a solution to the population growth the current one relies on.

“Increased economic prosperity and all economic models supported by governments and global competitors are based on having more young people, workers, than older people,” Chu said. “Two schemes come to mind. One is the pyramid scheme. The other is the Ponzi scheme. I’m not going to explain them both to you, you can look it up. But it’s based on growth, in various forms.”

There are at least two problems with that:

“The economists know this, but they don’t really talk about it in the open, and there’s no real discussion in government,” Chu said. “Every government says you have to have an increase in population, whether you do it through immigrants or the home population. So, this is a problem.”

China has replaced its one-child policy with incentives for parents to have two children, Chu noted as an example, and France offers a prize, the Médaille de la Famille Française, to mothers of large families. Incentives like these will not help the world achieve sustainability, he said.

Chu, the man who solved the Gulf Oil spill with a doodle on a napkin, then offered two painless solutions to population growth:

“In many countries around the world, developed countries, Japan, Spain Italy, we’re talking about 1.3 (children per couple), 1.2 going below 1, where 2 is steady state.”

So Chu expects these effects of rising living standards to eventually offset the growth of human population. That will help the environment, he said, but it will also require a new kind of economy.

Chu’s visit to the University of Chicago was sponsored by the Energy Policy Institute of Chicago (for whom I sometimes host podcasts) and the Institute of Molecular Engineering.

– By Robert U. Ayres

For several weeks, the guys and gals at CNBC and Bloomberg News, and their guests, have been talking about the coming tax reform (cut) legislation that the Republicans finally seem to have in their grasp. Well, maybe not exactly reform, maybe not revenue-neutral, but at least tax cuts for the corporations that give them campaign money. All the cheerleaders, both in Congress and the White House, assert confidently that faster growth will pay for the cost of the tax cut, even though virtually all economists (including me) say that it won’t.

END_OF_DOCUMENT_TOKEN_TO_BE_REPLACED

Abstract: The universe resembles a heat engine. It does work while cooling and expanding. The work performed is to create differentiable objects and structures, starting with elementary particles, then atoms, molecules,  bacteria, plants and animals, humans, social  organisms and scientific papers. The differentiation mechanism is called “symmetry-breaking. The selection mechanism – survival of the fittest, is familiar.

The evolutionary process before humans can be regarded as an accumulation of natural wealth. Humans have learned to exploit (and destroy) natural wealth in order to create “new” wealth. Can the new wealth, based on knowledge, compensate for the wealth destruction in order to ensure long term survival? Or are we on a suicidal path?

END_OF_DOCUMENT_TOKEN_TO_BE_REPLACED

The essay below is a short version of the main thesis of my new book, entitled “Energy, Complexity and Wealth Maximization”, just published by Springer. It points out the interesting correlation between the expansion and cooling of the universe, and the creation of complexity and diversity. In a fundamental sense, wealth can be characterized as diversity, although the billionaires of Wall Street probably think in terms of money.

But what does money provide if not choices? I venture to think that the ideas discussed here constitute the first baby steps toward a  thermodynamic theory of evolution. Even at its full length, the book is hardly a complete theory. There is a lot more to do. But it does suggest that the arrow of time is not necessarily aimed at the cold and the dark.