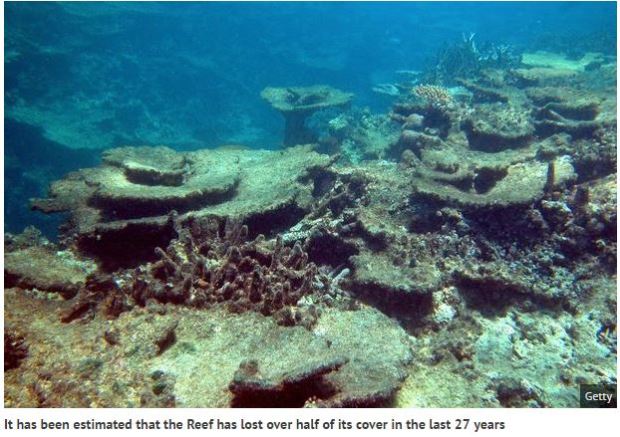 Most carbon emissions are absorbed by the ocean, but it’s running out of capacity, which could make global temperatures rise even faster.

The bottom line is that there is no alternative non-anthropogenic theory to explain rising temperatures, melting glaciers, sea level rise and ocean acidification. If we don’t act, the existing mechanisms of the climate will only reinforce the damage already done.

The third article in a three-part series, originally based on an interview, followed by a publication in “INSEAD Knowledge”.  I undertook it, at first, to compensate for the influence of certain climate deniers on the faculty and among the readers.

Australia’s Great Barrier Reef, a 25 million year-old ecosystem and home to 1,625 species of fish is on life support. Reports suggest about 93 percent of the reef has succumbed to bleaching, largely the result of climate change.

Spanning 1,400 miles, larger than the United Kingdom, the reef could soon become extinct. The bleaching is the result of increased acidity due to CO2 entering the oceans from the environment. Currently, it is estimated that 57 percent of new emissions are “dissolved” in the oceans. Moreover, (thanks to warming) the ocean keeps less carbon dioxide in solution. A warmer ocean will dissolve progressively less CO2, thus keeping more of the excess CO2 in the atmosphere. This so-called “carbon-cycle feedback” has different consequences in different general circulation models, ranging from 0.1°C to 1.5°C.

As I’ve pointed out in two previous articles, the true effect of CO2 is fiercely debated and some climate deniers even go so far as to suggest that an increase in emissions is good for the environment, that crop yields will increase as a result of photosynthesis. But ever-improving science tells us that things aren’t that simple, especially when it comes to the oceans. So to finish this series by looking yet again to the evidence, I demonstrate the effect of climate change on the oceans and the implications of this effect. We know three things for sure about the oceans:

The ocean tells the story

How do we know? First, thanks to the ARGO programme, we have increased our coverage of ocean temperatures, from surface to 2,000 meters below surface. With 4,000 floating sensors around the world, we know for certain that the temperature of the oceans is rising as seen below, which confirms historical (albeit more primitive) data. 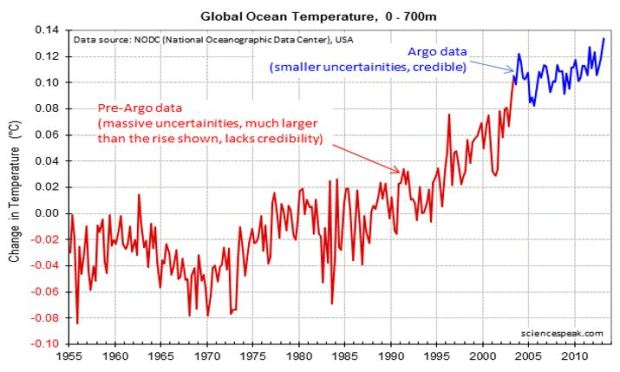 Secondly, sea levels have been rising by about 1.7 mm/year since 1901 and about 3.2 mm per year since 1993. The heating of the oceans is accelerating along with CO2 and temperature increases in the environment. The two main reasons are more water from melting glacier ice on land or from groundwater and thermal expansion due to ocean warming.

Thirdly, we can see ocean acidification in the near death of the Great Barrier Reef and other underwater ecosystems. About 30% of the excess carbon dioxide from human activity (fossil fuel combustion) is dissolved in the oceans. It is known that this produces carbonic acid, which subsequently reacts with calcium ions to form bi-carbonate, making it less available to calcification in organisms, such as coral.

Taking one for the team

The reason this is troubling is that the ocean has a tendency to reinforce these effects due to its nature. It is important to realise that the oceans are by far the main storage system for heat in the short to medium term, having absorbed 93% of the increase in global heating between 1971 and 2010 (IPCC 2014). They can absorb or emit heat much faster than solid rock, and can store much more (1000 times as much) than the atmosphere. Hence the effective heat storage capacity of the top 700 meters of the oceans, which exhibits measurable seasonal variation, is much larger than the heat storage capacity of either the atmosphere or the land. This is because thermal conductivity of the ground is very low and vertical convection through the crust is almost zero (except during volcanic eruptions), while the mass of the atmosphere is far less than that of the top layer of the ocean. Hence the oceans store much more heat in the summer than the land or atmosphere. This heat is then released during the winter, as the warm currents flow toward the poles. There may also be longer cycles, such as El Ninos.

The consequences of continuing to let the ocean take one for the team are many. Increased ocean warming alters the “conveyor belt” of surface and deep ocean currents. For example, this might cause the warm, salty Gulf Stream to abort its northward passage on the surface, and sink prematurely. This could be due to cooling and dilution by melting Greenland ice, plus increased salinity due to salt release from the melting of Arctic sea ice. Increased salinity makes the water denser and causes it to sink sooner than it does now. This may have happened in the past, during the rapid melting of the Wisconsin glacier. (Was this the cause of the “little ice age”?) If something like this were to happen again, northern Europe could be cooled as a direct consequence of general global warming!

Another possible effect of atmospheric warming in the far north would be to thaw some of the “permafrost” area, both above ground and under the Arctic ocean. Climate warming is happening much faster in the polar regions, than the tropics. (All the climate models show this effect.) The rapid thinning of the ice and likely disappearance (in summer) of the ice in the Arctic Ocean only a few years hence, is confirming evidence.

The fact that the poles are getting warmer faster than the tropics means that the north-south temperature gradient is getting smaller and less sharp. That, in turn, is pushing the northern jet stream northward (on average) at the rate of 2 km per year. This would permit both aerobic and anaerobic micro-organism activity under the soil surface to accelerate, releasing both carbon dioxide and methane into the atmosphere. The undersea “cousin” of permafrost on land, methane clathrate, could also start to thaw, releasing methane into the ocean and thence into the atmosphere, resulting in a positive feedback loop.

It seems likely that the rate of heat exchange in the deep oceans (not measured by Argo), depends on the thermo-haline (“conveyor belt”) circulation. It is probably much lower than heat exchange on the surface, since mixing induced by storms is less important. The rates of mixing vs. conduction and convection are still not well-known. (The residence time of a water molecule in the oceans is estimated to be 3200 years.) It looks like 90% of the excess heat warms the oceans, and only 10% warms the land surface. The heat taken up by the oceans causes thermal expansion of the water. Thermal expansion is one of the three possible causes of global mean sea-level (GMSL) rise.

The other two possible causes of GMSL rise are glacial ice melting and vertical land motion (VLM). Vertical motion results from the removal of the weight of glacial ice in certain terrestrial areas that were once ice-covered, such as Northern Canada and Scandinavia. The VLM adjustment is fairly localized. In fact it is negative (the sea floor is actually sinking, not rising, on average) because the land areas formerly covered by ice are now “springing back” as the weight of glacial ice was removed. The liquid magma under the Earth’s crust gradually rearranges itself as the ocean gets heavier and the land gets lighter.

Based on recent evidence, about one third of the GMSL rise – roughly 1.6 mm/yr – is due to thermal expansion of the water and two thirds is due to the melting of glacier ice (mainly Greenland and Antarctica). The quantitative change in ocean mass from glacier ice melting – as opposed to increased volume due to thermal expansion – is now being measured directly, not just estimated from indirect evidence. The measurement of ocean mass is now done from satellites that detect extremely tiny changes in the gravitational attraction over each part of the Earth’s surface. (Gravitational attraction is proportional to mass). This was not possible until after 2002, when ultra-sensitive new instruments for measurement of gravitational force were first utilised in the so-called Gravity Recovery and Climate Experiment (GRACE).

Throughout this series, I have demonstrated that the weight of the evidence is strongly in favor of the theory of anthropogenic climate change, even though there are some weak spots in the theory (water vapor) and the rate of change of sea-level rise. The good news is that the temperature rise on the surface of the Earth may be somewhat slower than the worst case scenario. But the bad news is that the positive feedbacks in the system may be significantly greater than heretofore considered, as we can see with the oceans.

The bottom line is that there is no alternative non-anthropogenic theory to explain rising temperatures, melting glaciers, sea level rise and ocean acidification. If we don’t act, the existing mechanisms of the climate will only reinforce the damage already done.

Robert U. Ayres is a physicist and economist, currently Novartis professor emeritus of economics, political science and technology management at INSEAD.. He is also Institute Scholar at the International Institute for Applied Systems Analysis (IIASA) in Austria, and a King’s Professor in Sweden.   He has previously taught at Carnegie-Mellon University, and as a visiting Professor at Chalmers Institute of Technology. He is noted for his work on technological forecasting, life cycle assessment, mass-balance accounting, energy efficiency and the role of thermodynamics in economic growth. He originated the concept of “industrial metabolism”, known today as “industrial ecology” with its own journal. He has conducted pioneering studies of materials/energy flows in the global economy.  He is author or co-author of 21 books and more than 200 journal articles and book chapters.  The most recent books are Energy, Complexity and Wealth Maximization(Springer, 2016), The Bubble Economy (MIT Press, 2014)  Crossing the Energy Divide with Edward Ayres (Wharton Press, 2010) and The Economic Growth Engine with Benjamin Warr (Edward Elgar, 2009).

This article is republished courtesy of INSEAD Knowledge. Copyright INSEAD, 2016

INSEAD Knowledge is the expert opinion and management insights portal of INSEAD, The Business School for the World. Knowledge showcases the latest business thinking and views from award-winning faculty and global contributors. Updated daily, with a weekly top picks email from the editor and a tablet and smartphone app, it is a free resource for global executives and managers looking for answers to business challenges. Knowledge provides insights on leadership, organisations, economics and finance, strategy, entrepreneurship, operations management, customers, careers, family business and responsibility. You will find articles, blogs and video interviews that cover all of INSEAD’s disciplines.

One thought on “What Climate Deniers fail to understand about the planet Earth. Part 3: The Ocean Cannot Absorb Much More CO2”